CURSE OF THE BRA STRAP 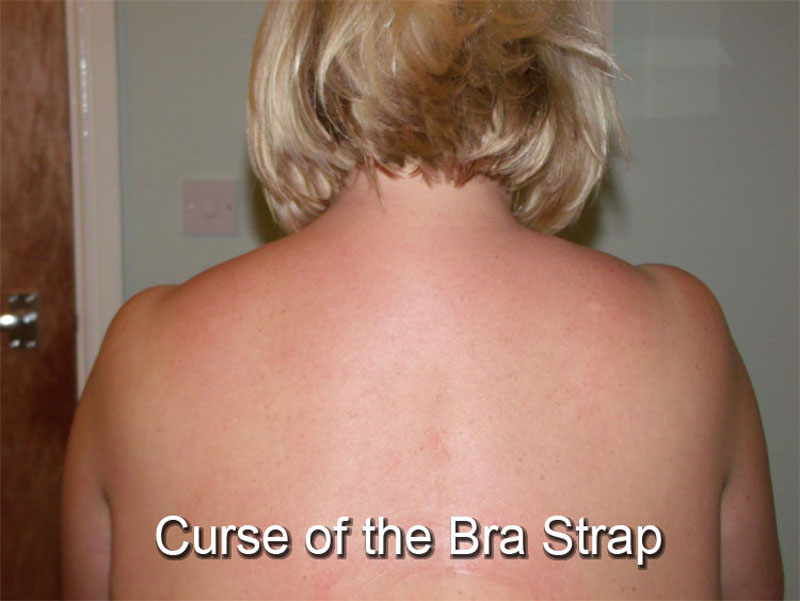 A patient came to Therapyroom1 complaining of severe shoulder pain. When she lifted her arms she felt tightness at the top of the shoulders and along the medial deltoid ligament so much so that the pain was having an extremely negative effect on her life. This patient stated that she was suffering from regular headaches possibly because of shoulder pain.

Our examination was a short one in that we took a photo of the back of the patient and noticed that the bra shoulder strap cut deeply into the top of the shoulder. Closer examination saw that the deltoids and supraspinatus muscle we being cut off by the strap. We asked the patient what her bra size was and told that she was 40H.

The problem that the patient had was that because she had large breasts the shoulder straps pulled on the top of her shoulder and every time that she tried to move her arms the straps resisted shoulder movement.

Medically we call this Bra strap syndrome and it related to wearing the wrong style or poorly fitted bra. Poor fit leads to complications like chronic shoulder pain and back pain and is noticeable by indentations in the bra strap shoulder area.

The solution was simple really, we asked her to when at home wear a sarong or scarf bra to remove shoulder restriction. For work, we advised a sports bra. The result 3 months later was that this patient no longer has shoulder pain, headaches or back pain in the rhomboids area of her back.

The costoclavicular syndrome .causes compression by downward movement of the clavicle against the first rib with a resultant tendency to shearing of the neurovascular bundle.[1]

This can occur by:

We use cookies to ensure that we give you the best experience on our website. If you continue to use this site we will assume that you are happy with it.Ok